Warsaw, 31 January 2011 - The total modern office stock in the key regional markets of Poland (i.e. Kraków, Wrocław, Katowice, Poznań, Tri-City and Łódź) was 1,820,000 m², of which the office stock located in Kraków and Wrocław represents 45% of the office stock as above.

Mateusz Polkowski, Senior Research Analyst, Jones Lang LaSalle said: “We noticed an increase in corporate demand in all major office markets over 2010. 230,000 m² was leased in regional markets, with Kraków and Wrocław clearly taking a lead in respect of occupier activity. Take-up was generated by both newcomers (e.g. IBM in Wrocław, Sony in Tri-city) and expanding companies already operating in these cities (e.g. Motorola or Capgemini in Kraków).”

Office buildings totaling 238,000 m² were under construction across major regional office markets, with construction activity most pronounced in Wrocław, Kraków and Tri-City (62,000 m², 55,000 m² and 42,500 m² respectively). This excludes a variety of projects whose construction started and was subsequently put on hold which represent another 69,000 m². The biggest office projects being currently developed in Poland include: Sky Tower in Wrocław, Andersia Business Centre in Poznań and Oliva Gate in Gdańsk.

The office vacancy in Poland ranging in most markets between 10-20% provides a reasonable choice of accommodation for office occupiers, an important factor for BPO and SSC centres amongst others. Wrocław with a vacancy ratio of less than 3% is unique in this respect, and this undersupply of office space triggers new development on this market. Major pipeline office provision includes: Green Towers I, Sky Tower and Wojdyła Business Park phase II. 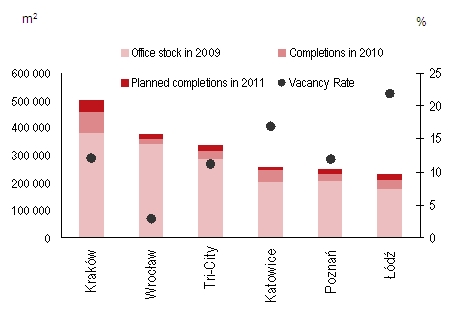