Offices for rent in Tri-City

The Tri-City metropolitan area is home to more than one million people (around one third of the population of Pomorskie Voivodship). Gdańsk and Gdynia are the leading economic centres of northern Poland, while Sopot is a well-established, fashionable seaside resort.

The seaside location remains the main natural and tourism asset of the Tri-City. The variety of coastline environments (sandy beaches, cliffs and the lowland coast of the Bay of Puck), the booming tourism industry of the city of Sopot, the Hel Peninsula – a Mecca for Polish windand kite-surfers – which is reachable by car in less than one hour, the Kashubian Lake District as well as the numerous venues of historical appeal (e.g. the European Solidarity Centre, the Museum of the Second World War – both in Gdańsk – and the Emigration Museum in Gdynia), make the agglomeration one of the country’s largest tourist attractions and best places to live and work.

The expanding container ports in Gdańsk and Gdynia (with the deepwater terminal in Gdańsk offering the technical parameters needed by container vessels able to carry more than 18,000 TEU, i.e. some of the largest currently existing vessels), play an increasingly important role in the Tri-City’s economy.

Being the largest such facilities in the south Baltic Sea, the ports have become gateways for many of the growing economies of the CEE, Baltic Russia, Asia and the Pacific.

The Tri-City, a co-host of the Euro 2012 European football championships, saw a construction boom in transportation infrastructure. The agglomeration gained a motorway connection with central Poland (the A1 motorway) and the Tri-City’s ring-road system was expanded. In addition, the opening of the Pomeranian Metropolitan Railway in 2015 greatly improved links between Lech Wałęsa international airport (with the new T2 terminal opened in 2015) and the entire agglomeration and the wider Kashubia region. Furthermore, the train connection between Warsaw and Gdańsk shortened to less than three hours.

A distinctive feature of the Tri-City is a talent pool with a good command of niche foreign languages, with around 60% of people who speak Scandinavian languages in Poland residing in the Pomeranian region. This, along with recent improvements in transport infrastructure, look set to open up new business opportunities for the region in terms of labour market development, attracting new projects from the business services sector (currently the Tri-City is the fourth largest BPO centre in the country).

In 2015 the Tri-City office market hit the 0.5 million m2 threshold and joined the premier league of the largest office markets in Poland, alongside Kraków and Wrocław. Currently, total office space is over 570,000 m2, and the market is expected to grow at a robust pace in the upcoming years due to sound occupier demand, which echoes positive labour market sentiment. Indeed, the region of Gdańsk, Gdynia and the fashionable tourist Sopot is increasingly seen as an attractive place to live and work and relocations from other cities including Warsaw are not unusual.

At the moment, approximately 138,000 m2 of high quality office product is at various construction stages, which can be compared to the office development activity in the CEE capitals of Prague and Budapest. The growth in the market is sustainable and clearly a response to the sound demand from the BPO/SSC sector. We estimate that the Tri-City will grow to nearly 800,000 m2 by the end of 2018, which will give it a greater scale and critical mass to become even better known across Europe.

The capital of the Pomeranian region will expand its business map with a new office building called "Punkt". In Gdańsk, at Nad Stawem 3 Street, a six-story building will provide approx. 13,000 sq. m. ...

One of the biggest office projects in Gdynia, 3T Office Park, has received a formal use permit. First companies will move into the office building before the end of 2021. 3T Office Park is located at ...

Punkt will be a modern office building located in Wrzeszcz. In total, the building will have six above-ground storeys and one under-ground storey, of which the ground floor will be intended for commer...

Yacht Park in the prestige competition 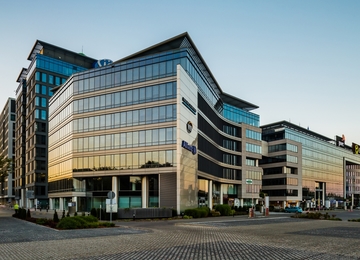 In the Olivia Business Centre office building in Gdańsk an all-year garden was created with an area of about 800 m2, filled with thousands of plants brought from tropical areas. It is divided into fou...

Waterfront is a modern mixed-use complex, which second phase - Waterfront II will be built at the intersection of Waszyngtona and Hryniewickiego Streets in Gdynia. The Complex will provide office, res... 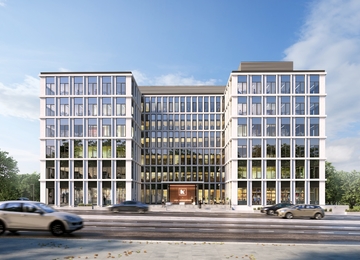 Topping out on K2

A symbolic topping was hung on the K2 building at Kielecka 2 Street in Gdynia. The final completion of the office building is planned for the end of 2021.At the end of February, construction works on ... 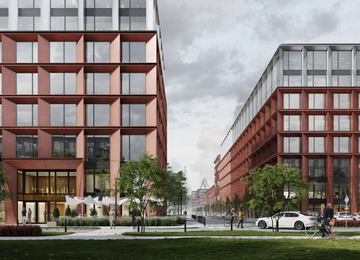 Palio Office A with the use permit

The Palio Office A office building in Gdańsk has already been commissioned. It is the first of eight buildings in the Palio Office Park complex. The investment is located in the Młode Miasto district ...

Construction of the next stages of Palio Office Park

Located in the Gdańsk Shipyard, the Palio Office Park investment is a complex ultimately of eight office buildings, with an area of almost 90 thousand sq. m. office and recreational space.Construction... 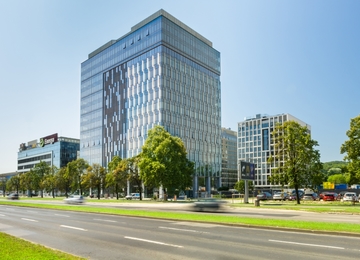 The first tropical tree has already been planted in the largest business center in Poland. The winter garden is not only thousands of plants and a green space for relaxation but also a new meeting zon...