Offices for rent in Warsaw

The Warsaw Hub B

Warsaw is the political, economic and cultural centre of Poland. The city is the seat of the Polish government, the parliament and most public administration institutions, as well as regional representatives of international organizations such as the EU, Frontex, the UNO, the World Bank, the International Monetary Fund, and the European Bank for Reconstruction and Development, among others.

It is the largest city in Poland and the ninth most populous capital city in the EU. The wider Warsaw metropolitan region is home to more than 2.5 million inhabitants and has a forecasted positive population growth until 2035.

The city is now establishing itself as a regional financial centre. In Z/Yen’s Global Financial Centres Index 18 Warsaw is the top rated city in ‘Eastern Europe and Central Asia’, placed 38th, ahead of Istanbul, Prague and Moscow, as well as the likes of Munich and Brussels in Western Europe. Closed from World War II until reopening in 1991, the Warsaw Stock Exchange has become the most important market in this part of Europe, with around 500 companies listed.

Warsaw’s economic indicators far surpass those of any other city in the country, making the Polish capital one of the most attractive investment locations in the whole of the CEE region. fDi European Cities and Regions of the Future 2016/17 ranks Warsaw as one of the top ten major European cities for both cost effectiveness (sixth) and business friendliness (fourth). The city’s economy is geared towards services, most notably banking and finance, insurance, consulting and media, as well as electronics and high-technology industries.

Warsaw is an exciting place to live and work. The city offers numerous social, cultural, and educational institutions of national importance, including the National Opera, the National Museum, the National Theatre, the Warsaw Uprising Museum, the Museum of the History of Polish Jews, the Philharmonic Orchestra, and the Copernicus Science Centre, as well as sports and recreational facilities (e.g. the brand new National Stadium). It also has a long list of renowned international nursery, primary and secondary schools.

The high quality of life is also pronounced as far as transportation systems are concerned. Warsaw is the only Polish city with an underground (two lines) and also offers public transport including rail, fast city rail, trams, buses and, most recently added, Veturilo bikes. Importantly, Warsaw features excellent international accessibility, with the city being reachable from most major European cities within no more than three hours’ flying time. The two international airports located in or near Warsaw, i.e. the city’s Fryderyk Chopin’s airport and Warsaw-Modlin Mazovia airport (for low-cost airlines and charter flights), account for 45% of all passenger air traffic in Poland.

Warsaw features an impressive economic development, with a GDP forecast by Oxford Economics averaging 3.73% over 2016-2018 - a rate predicted exclusively for Warsaw and Kraków from the entire spectrum of well performing economies in Poland. The city is not only the dominant financial hub in the Central and Eastern Europe, but it also has the largest office market, which is undoubtedly changing the city’s skyline and urban development. Central Warsaw with its high-rise towers and Mokotów (most notably Służewiec Przemysłowy – referred to as the Upper South district), are where most of office space has been developed to date; each is home to approximately 1.3-1.4 million m2 of modern stock and is an office district in its own rights comparable size-wise to the entire supply in Glasgow, for example. The third well known office district is the Jerozolimskie Corridor (also known as the South West district), which currently houses 17% of all stock. 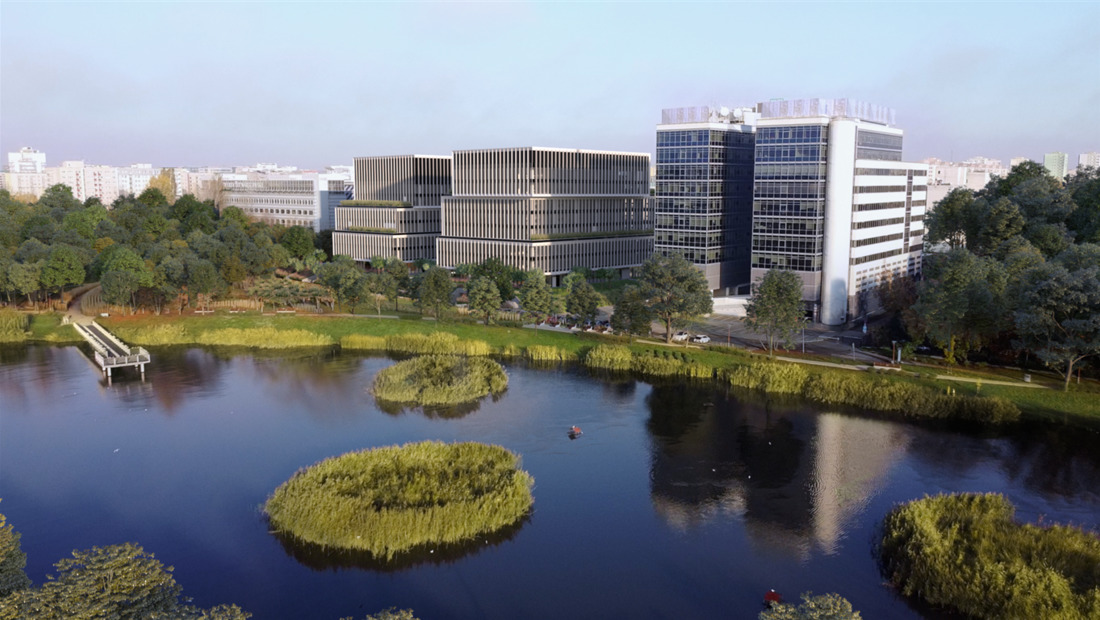 JLL advisory company has been appointed the exclusive agent responsible for the lease of the Lakeside office building. The investment project is owned by the Belgian real estate development company AT... 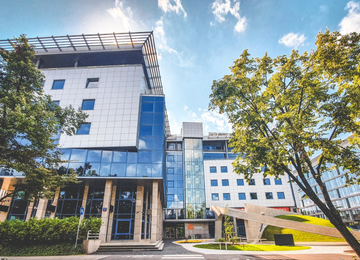 The Amphitheater brings Mokotów together

In the heart of Warsaw's Służewiec district, an open-access amphitheater was created. The space is suitable for a variety of activities that can be performed outdoors. These can be speeches, markets, ... 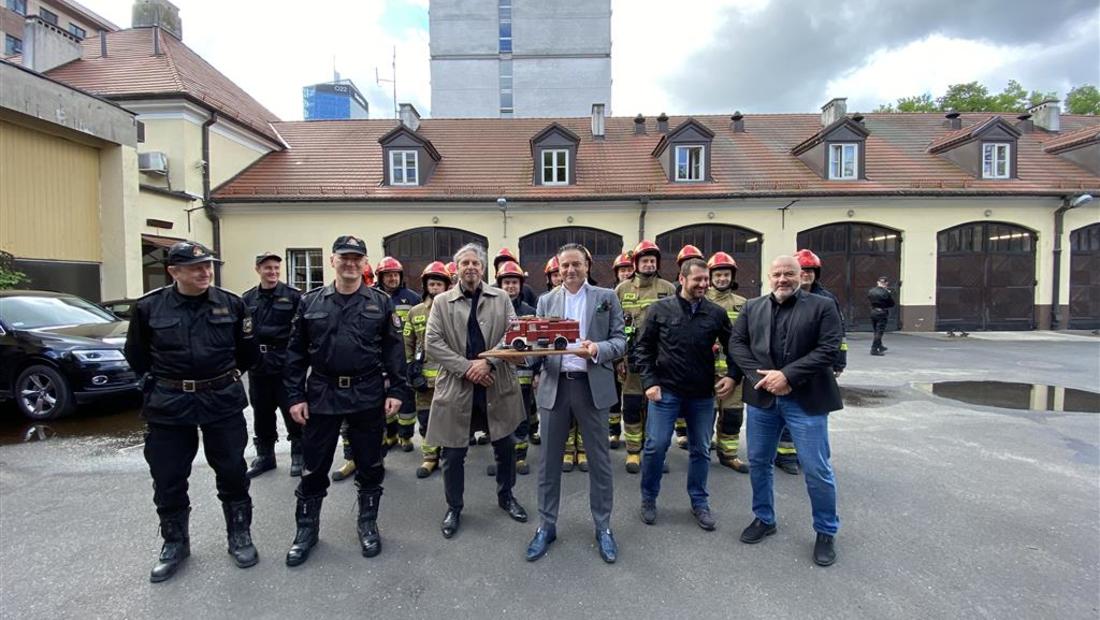 Two fire brigades have acquired innovative equipment for extinguishing fire in high-rise buildings in Warsaw. Special-purpose firefighting sets were designed and manufactured by firefighters. This is ... 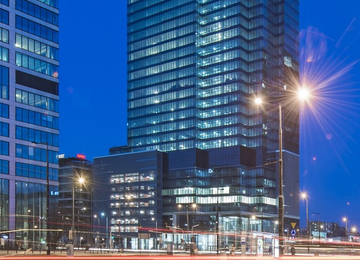 Warsaw Unit is open for tenants

The construction of the Warsaw UNIT lasted 48 months, which resulted in obtaining a use permit. First tenants will move in soon. Warsaw UNIT offers 57.000 sq.m. of office space for rent, located on 45... 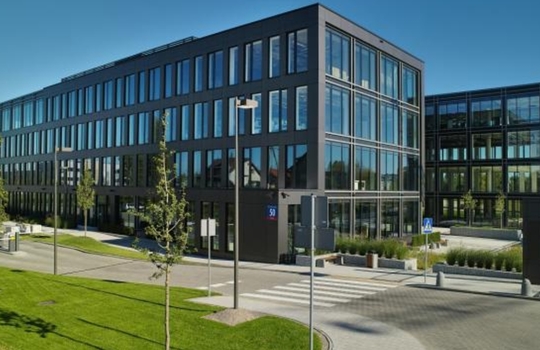 VELUX to expand offices in The Park Warsaw

The VELUX Group has renewed its lease at The Park Warsaw, significantly expanding its presence in the White Star Real Estate development. The new agreement covers a lease of more than 3,000 sqm of spa... 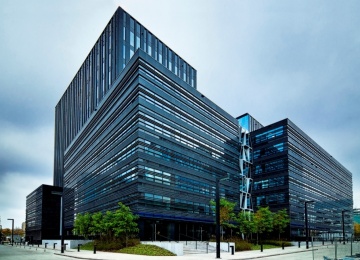 The first stage of modernization of the Wola Center building, located at Przyokopowa street in Warsaw's Wola district, has just been completed. Common spaces and the main lobby have been transformed, ...

The office building SKYSAWA has received the highest BREEAM Interim certification at the Outstanding level. It has achieved a score of 93.6%, which is the highest score ever recorded in Poland in the ... 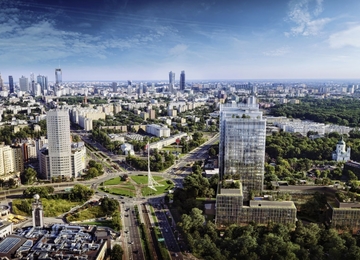 Forest with the first stage completed

Construction works have been completed on the first building of the project Forest Campus, which offers 23,000 sqm of office and commercial units. The nearby tower has already reached its target heigh... 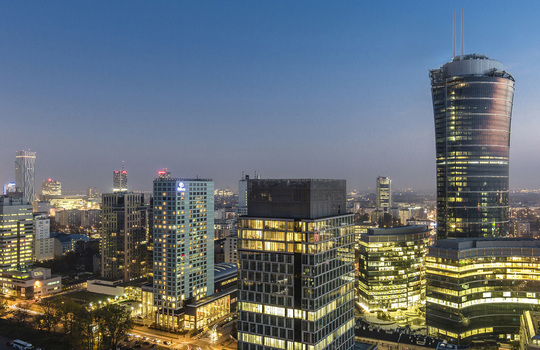 Warsaw office sector saw the lowest volume of space under construction in 11 years along with relatively low tenant activity. However, the business services sector provides hope for the future.  JLL ... 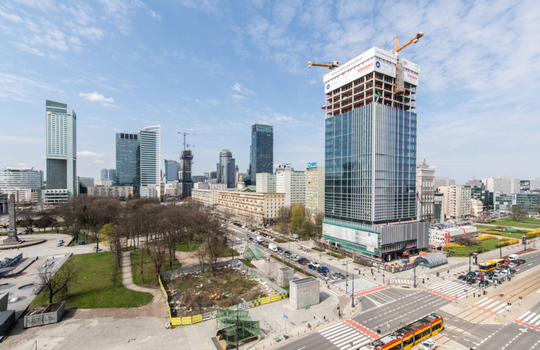 Central Point in Warsaw has now reached its target height of 86 meters. The building, located at the intersection of two subway lines, consists of 21 floors and will offer nearly 20,000 sq m of space....