Over 1.1 million sq m is currently under construction in Poland. The most active markets in terms of office space in the pipeline are Warsaw, Kraków, Wrocław and Tri-City. Refurbishment trend gains pace in Warsaw.

Mateusz Polkowski, Associate Director, Research and Consultancy, JLL, said: “Construction activity in Warsaw remains high. Currently, approximately 579,000 sq m is under active construction, and an additional 62,000 sq m is under refurbishment. Remodelled and renovated buildings account for around 10% of the developed office space in Poland’s capital city. We think that the trend of older buildings being refurbished and  tailored to market needs and expectations will continue. In 2014, a total of ca 350,000 sq m of new offices will be completed, including the above- mentioned refurbishments. The Warsaw market will roughly maintain its current pace in 2015 and 2016 with ca 300, 000 sq m of new supply being completed for each of these two years. The volume of new office projects will be reflected in the continued upward pressure on the vacancy rates. We expect that in 2016 the total office stock in Warsaw will hit 5 million sq m”.

Demand – Mokotów as a leading district in Warsaw

Stock and supply – 1.1 million sq m under construction across Poland 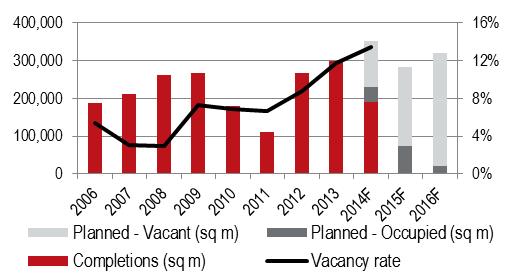 Currently, 531,400 sq m of office space is under active construction in Poland’s major cities. Kraków, Wrocław and the Tri-City account for 67% of all projects. Kraków is taking a clear lead in this respect, with 136,500 sq m of office space under construction, 64% of which will be delivered by the end of 2014. Moreover, almost 44% of all space under construction in Kraków is secured by pre-let agreements, outperforming other major cities, where between 18.5% and 25.5% is pre-let (the exception being Szczecin, with 8.5%) 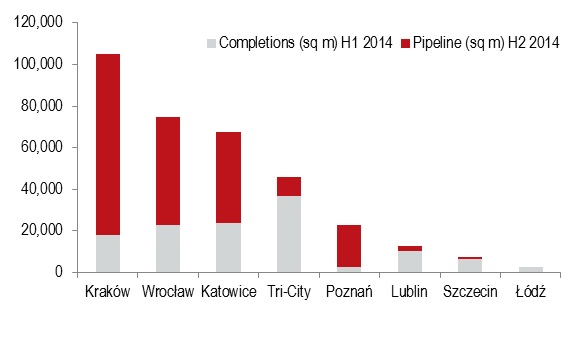 In total, over 1.1 sq m is under construction across Poland.

“We expect that the vast majority of office markets in Poland will remain favourable to tenants. The situation will be more balanced in those markets characterised by stable demand for office space and relatively low vacancy rates”, Mateusz Polkowski summarized.