Tomasz Czuba, Head of Office Agency, JLL, said: “Warsaw still attracts a significant number of tenants and 2014 was a very good year for the city's office market in terms of demand. Total office take-up in Warsaw reached approximately 612,000 sq m in 2014, only slightly below 2013's record -breaking performance. It is worth underlining that the public sector had a 13% share in the total take-up volume in 2014. This clearly indicates that the public sector has become one of the key demand drivers in Warsaw. Going forward, we expect the overall market sentiment in terms of demand to remain positive”.

In Q4, demand registered in Warsaw resulted in a total of 191,000 sq m. The largest deals in Q4 were signed by: Agency for Restructuring and Modernisation of Agriculture (renewal for 17,500 sq m in Poleczki Business Park), PKP Group companies (15,000 sq m pre-let in West Station) and Deloitte (10,600 sq m pre-let in Q22). The largest lease agreement in 2014 was signed by Raiffeisen – Polbank (19,500 sq m in Prime Corporate Center). 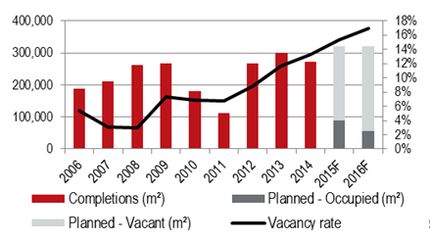 2014 was a very active year on the major office markets outside Warsaw.

Mateusz Polkowski, Associate Director, Research and Consultancy, JLL, commented: “2014 was a very successful year for the regional markets. Over 323,000 sq m was brought to major agglomerations outside Warsaw in 2014 which was more than in the capital city over the same period. Kraków, Tri-City and Katowice accounted for 70% of the new supply. Importantly, a record-breaking year for regional markets in terms of demand was registered, with 2014 take-up levels exceeding 445,000 sq m, which translated into a brief reduction in vacancies. The business services sector continued to play a strategic role in office market development in Poland’s regional cities. We expect 2015 to also be active. Development activity remains exceptionally strong - currently more than 630,000 sq m of office space is under active construction outside Warsaw, with over 400,000 sq m scheduled to be completed this year. New supply expected in regional markets for 2015 is again set to exceed that of the capital city”.

As for the office space under construction it is Wrocław and Kraków which are the frontrunners in this respect (both around 160,000 sq m).

Due to the very limited number of new completions in Q4, the vacancy rate in Warsaw decreased slightly to 13.3%, however, the ongoing upward trend in both 2015 and 2016 looks set to continue.

Vacancy rates varied across the country. Most of the major markets outside Warsaw recorded a reduction in vacancies over the course of the year. Only Katowice and Kraków noted a slight increase in unoccupied stock. Despite the changes, Kraków still registers the lowest vacancy rate (6.0%) and Szczecin the highest (15.8%).

Prime headline office rents in Warsaw remained relatively stable during Q4. However, rents are still on the decline due to the large amount of new office supply to be delivered to the market. Currently, the prime headline rents in the Warsaw City Centre range between €22 - €24 / sq m / month, and non-central locations command rents of between €11 - €18.5 / sq m / month.