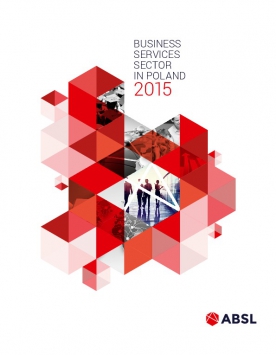 According to the latest ABSL report, foreign-capital service centers operating in Poland now employ 150,000 specialists. This means that since April 2014, investors have created another 22,000 high-quality jobs. Since the beginning of 2014, 60 new foreign-capital service centers have been set up in Poland.  For the first time in its history the country is gaining an internationally recognised specialisation – management of advanced business processes for the world's leading corporations. Thanks to foreign investors, we can observe a transfer of modern business, process and technology solutions, which has resulted in boosting the innovativeness of the entire Polish economy.

According to the research, the results of which were published during the Annual ABSL Conference, 532 service centers located in Poland currently employ 150,000 specialists. Over the past two years, the sector's workforce has increased by more than one third. In the last eighteen months many companies have decided to establish centers in Poland including General Motors, FedEx, Mars, Owens-Illinois, Toyota, UPS .

- Since 2009, when ABSL launched its operations, 100,000 new jobs have been created within the sector, meaning that today 150,000 specialists work for foreign-capital service centers. The future outlook continues to be very optimistic. By 2020, employment may hit the 250,000 mark. This is a quarter of a million jobs for graduates, specialists and managers. These are also high quality employment opportunities that allow for development and promotion within international structures of large organizations and a driving force of the entire Polish economy– said Marek Grodziński, Vice President ABSL, Head of European BPO Delivery Centers, Board Member, Capgemini Poland.

Since the beginning of 2014, 60 new service centers have been created in Poland. In the past few years, the number of these units has grown dramatically. In 2002, there were only a few dozen foreign-capital service centers operating in Poland. By 2007 this number had gone up to 200, and by the second half of 2014 had risen to 500. These numbers illustrate the dramatic growth of Poland's business service sector.

- The business service sector continues to constitute the largest proportion of foreign direct investment projects in Poland.[1] Over 356 investors from all over the world now operate in the country. Thanks to this sector, Poland is fast becoming an internationally recognised brand - says Jacek Levernes, President of ABSL, Vice President of HP Europe, GBS.

Krakow continues to be the largest business service sector hub with 35,700 people employed in foreign-capital service centers. Warsaw is next employing 27,000, with 23,700 in Wroclaw, 13,700 in Tri-City and 13,100 in Lodz. Sector employment in the Katowice Agglomeration totals 11,200, while 9,000 people are employed in Poznan.

In the past few years, Poland has become a major investment destination for the biggest global players. For example, Krakow for another consecutive year was named the top European and 9th worldwide business services destination according to Tholons. Once again it is becoming clear, that a country’s investment attractiveness is determined to a large extent by its economic and political stability. In the face of the current Ukraine crisis, Poland is considered a safe and attractive investment destination in the region, which allows it to attract increasingly complex projects.

An army of experts

Among 150,000 sector employees in Poland, the largest group are IT specialists. This type of services is provided by one in three professionals working within the sector.  Finance & accounting specialists are the second largest group accounting for 22%  while employees handling processes for the BIFS sector (Banking, Insurance and Financial Services) make up 13% of the sector's workforce. 89% of centers deliver services to Western European countries, and  45% to North America. The international character of the centers’ operations gives employees access to knowledge and best business practices established by global corporations.

- In the past few years, companies operating in the sector have contributed to the closing of the competency gap visible on the Polish labor market. They have allowed thousands of employees to gain business experience as well as access to the know-how of the largest global brands. - says Piotr Dziwok, Vice President of ABSL, Country Chair Shell Polska, General Manager Shell Business Operations Krakow.

Nine out of ten companies surveyed see an increase in the complexity of services handled in Poland. Moreover, Poland has an opportunity to attract even more advanced projects. Today, investors representing global investment funds are showing an interest in our country. To use this opportunity it is necessary to implement a number of legislative changes that simplify the investment fund registration process. According to ABSL calculations, this could result in 7 billion PLN being pumped into the national budget in the form of taxes and social insurance payments as well as the creation of  another 100,000 new jobs within the next five years.

- We are talking about well-paid jobs that require specialised knowledge, such as managing asset portfolios, cash assets and risk for international management funds – added Jacek Levernes.

What underpins the business service sector development phenomenon is Poland’s talent pool and the country's economic global integration. Among the sector employees’ assets are knowledge, well-developed soft skills and foreign-language competency. Generally speaking, service centers in Poland handle processes in 40 languages. The employees of an average center use eight languages, with one center using thirty-one .

The average service center operating in Poland employs 285 people. The number of units employing  in excess of 1,000 specialists has increased slightly year-on-year.

- Since April 2013, sector employment in each of the 10 largest business services hubs has increased by at least 25%. What is important is that investors have declared their intention to continue recruiting. 86% of centers surveyed intend to expand their staff by, an average 28%, by 2016 . – commented Janusz Górecki, Head of Research, ABSL.

- Service centers create attractive jobs both for graduates and experienced workers. This is a knowledge-based sector, which is why salaries are determined not only by foreign-language competency but also technical skills and work experience. When it comes to foreign-languages, among the best-paid skills is fluency in Scandinavian and Nordic languages as well as the knowledge of Russian, Spanish, and the Romance languages. German and French are the languages most sought after by employers. Moreover, companies increasingly appreciate specialist knowledge. – says Agnieszka Dzierań, Business Development Manager, Antal International.

The majority of employment growth (80%) is generated by companies that launched their operations in Poland before 2014. This means that investors are very much satisfied with the country’s business climate and are here for the long-term. A good example of this trend are companies such as Infosys and Capgemini, which annually recruit several hundred new employees.

The sector's main investment stream focuses on Krakow, Warsaw, Wroclaw, Tri-City, Katowice Agglomeration, Poznan and Lodz. However, every year development opportunities open up for smaller cities. For example in the past two years, the largest employment growth – more than 50% – was recorded in Lublin and Bydgoszcz. Significant employment growth in foreign-capital service centers was also recorded in Opole, Rzeszów, Toruń, Piła and Olsztyn.

The sector not only creates jobs but also contributes to the cities’ infrastructure development and fosters the economic growth of entire regions. This is illustrated by the office market development, which is largely stimulated by the business service sector.

- Poland continues to be the most dynamically developing office market in the CEE. The country accounts for 40% of all office space available in the region.    The total volume of office space in Poland amounts to 7.5 million sq m, while another 1.4 million is under construction. The business service sector contributes substantially to the market's development. Currently, service centers generate 65% of the demand in regional cities outside Warsaw. What makes the country stand out in the eyes of investors is a large number of very well-developed  agglomerations such as Warsaw, Krakow, Wroclaw, Tri-City, Katowice, Poznan, Lodz, Szczecin and Lublin – says Anna Młyniec, Head of Tenant Representation and Office Agency, JLL.

So what is necessary to ensure a continued, rapid development of the industry? Sector representatives suggest changes that will simplify investing in Poland as well as the running of operations in the country. Business wants to become the government’s partner. The sector's representatives already indicate the directions of changes and recommend legislative corrections that will boost the national economy’s growth. In the face of the upcoming reduction of EU funds availability, such projects should become a priority for both local and national government.

University curriculums should be verified yearly so that they can be adjusted to the evolving needs of the labor market. It is also crucial to emphasize soft skills such as the ability to adapt to change, teamwork or pitching one’s ideas. These skills are indispensible in the modern business environment.

- To stay competitive it is necessary to continually develop our ability to identify new trends and retain the conviction that change is the only constant element of the global business environment – summarized Wojciech Popławski.

„Business Service Sector in Poland 2015” report was published during the 6th ABSL Conference. It was created in cooperation with ANTAL International, Baker & McKenzie, Everest Group and JLL.

The Annual ABSL Conference is one of the most important events in the  economic calendar of Poland and Europe. Every year it attracts several hundred guests including political and business leaders. The Special Guest of the 2015 edition was Tony Blair with the city of Krakow as the event’s Main Partner.

[1] handled by the Polish Information and Foreign Investment Agency (PAIiIZ)