Tomasz Czuba, Head of Office Agency at JLL, says: "H1 2015 was a very intense time on the Polish office market. Up to the end of June, gross demand in the country totalled 690,000 sq m, and the major markets outside Warsaw experienced another period of record-breaking demand for office space – 298,650 sq m in H1. In addition, Warsaw saw a great deal of tenant interest with Q2 setting a record in terms of demand. Developer activity continued apace. In H1, the market expanded by approx. 345,000 sq m of new office supply, with Warsaw accounting for almost 147,000 sq m, Poznań – 50,700 sq m, and Wrocław – 43,900 sq m. Currently, approximately 1.4 million sq m of modern office space is under construction in Poland."

Demand - a record-breaking Q2 in Warsaw

“Interestingly, the volume of leased space in the second quarter in the City Centre Fringe district caught up with that of Mokotów district - to date the most popular tenant choice. The central districts accounted for 36% of demand, confirming a temporary shift in the center of gravity toward the City Centre Fringe, particularly the surroundings of Daszyński Roundabout,” adds Tomasz Czuba.

Almost 255,000 sq m of office space leased in H1 in Warsaw was for new deals and a further 29,700 sq m constituted expansions. Net take-up accounted for 73% of total demand. The positive sentiment in the leasing market is expected to continue for the remainder of 2015 and in 2016, according to JLL.

H1 2015 saw a record-breaking demand of 298,650 sq m outside Warsaw [1], with a 35% share registered in Kraków. A recovery has been witnessed in Poznań, with demand already exceeding the city’s volumes for the whole 2014. The business services sector continues to be a strategic tenant on regional markets.

Development activity in Warsaw remains strong, with more than 725,000 sq m under construction and some 28,000 sq m under refurbishment. It is estimated that approximately 46% of the 207,000 sq m of office space, planned for delivery over the course of H2 2015, is pre-leased.

“The under construction pipeline in regional markets totals over 650,000 sq m. 21% of all office space under development is already pre-let,” comments Anna Bartoszewicz-Wnuk, Head of Research and Consulting at JLL.

The increase in supply, which coincides with record rates of demand, has stabilized vacancy rates in major agglomerations outside Warsaw or have recorded slight declines, for example in Poznań and Kraków. The lowest vacancy rates were recorded in Kraków (5.3%) and Łódź (7.7%), while Poznań (21.7%) and Szczecin (15.6%) had the highest. 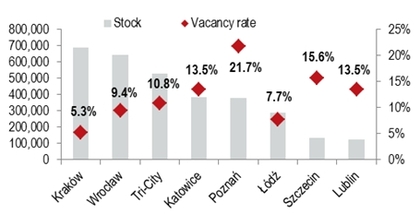 Prime rents in Warsaw fell slightly over the course of Q2, despite the healthy levels of demand. Currently, the highest prime headline rents in Warsaw City Centre range between €21 and €23.5 / sq m. / month. and €11 to €18.0 / sq m/ month in Non-Central locations.

“2014 was very good for regional cities and H1 2015 undoubtedly confirms that this trend has been maintained. In our opinion, last year's record demand will be beaten again this year. Development activity remains buoyant, illustrating that the market favors companies seeking offices, and that tenants will have a wider choice of locations and building standards, as more new projects will be commissioned for use. However, this record-breaking new supply that will be delivered means that not all markets will remain stable in terms of vacancy rates. Despite the strong demand, the vacancy rate may increase, for example in Kraków or the Tri-City. On the other hand, in the cities with currently the highest vacancy rate, Poznań being a case in point, this index will stabilize due to the small volume of space under construction and demand expected to be higher than in 2014”, summarizes Anna Bartoszewicz-Wnuk.