According to JLL’s report, Pomeranian voivodeship's key infrastructure project will improve public transport, and may enhance existing locations and create new directions for the development of commercial and residential real estate market.

Furthermore, PKM has a chance to generate new opportunities for the Tri-City labour market, which may help to attract new investments from the business services sector. 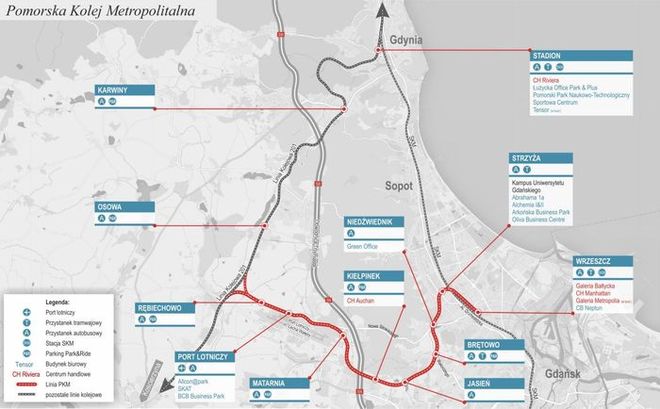 The research paper was prepared in cooperation with Invest in Pomerania and REAS.

The publication underlines the region’s opportunities related to the impact of Pomeranian Metropolitan Railway (Pomorska Kolej Metropolitalna - PKM) on the development of the labour market, attracting new projects from the business services sector, as well as other opportunities for commercial and residential market.

Marcin Faleńczyk, Deputy Director at Invest in Pomerania, said: “The region’s investment attractiveness is determined not only by access to qualified staff and modern office space. Developed technical and transport infrastructure are other important factors that have a major influence on an investor’s decision when considering a location. Although the Tri-City at the moment has the appearance of one big construction site, the infrastructural investments being currently undertaken will greatly enhance the role and attractiveness of Tri-City in the eyes of investors. The key investment projects in the region include PKM, the development of Gdańsk and Gdynia ports, the tunnel under the Martwa Wisła river, the Tri-City northern ring road and SKM station Gdańsk Śródmieście.”

Pomeranian Metropolitan Railway is Tri-City’s flagship infrastructural investment and will connect Gdańsk and Gdynia with an airport through an urban railway line. Currently, the section between Gdańsk Wrzeszcz and the areas of Rębiechowo station is being developed. It is 18 kilometers long and its opening is scheduled for September 2015. There will be several stations on its route: Wrzeszcz, Strzyża, Niedźwiednik, Brętowo, Jasień, Kiełpinek, Matarnia, Port Lotniczy and Rębiechowo. Simultaneously, railway line no. 201, which links Gdynia Główna with Kartuzy and Kościerzyna, is being modernized. It will be linked with PKM and will provide stations Osowa, Karwiny, Stadion.

PKM’s impact on the Tri-City will be significant due to several factors.

Magdalena Reńska, Head of Tri-City Office, JLL, commented: “The launch of the PKM rail connection from Gdańsk and Gdynia to Żuków, Kartuzy and Kościerzyna will reduce travel time to Tri-City for the residents of the Kaszuby region. It is worth mentioning that the Tri-City office market development is driven by the BPO/SSC companies and most employees from this sector are from younger age groups, who also happen to be the most frequent users of public transport. This means that PKM may indirectly influence the development of the business services sector by enhancing the Tri-City’s accessibility for employees from the surrounding areas. As a result, companies from this sector, which stress the importance of job market opportunities, will find the region more attractive”.

The Pomeranian Metropolitan Railway will not only improve the quality of public transport in the Tri-City and the surrounding areas, but will also influence the geography of the real estate market. The PKM will increase the impact of the Tri-City in the south-western part of the agglomeration and Kartuzy and Kościerzyna poviats. It will act as a stimulus for the development of the real estate markets in these areas, and will increase inflow of potential employees from the fringe of agglomeration to its core.

“PKM will enhance the existing office locations in Gdańsk, for example Wrzeszcz, and in Gdynia the vicinity of Łużycka – due to the station Stadion. Furthermore, it has the chance to increase the development of surrounding areas of Gdańsk airport”, Magdalena Reńska added.

The Wrzeszcz and Oliwa areas are currently two gravity points for the entire Tri-City agglomeration. This is where the largest office hub and popular shopping centres are located (e.g. Galeria Bałtycka, Manhattan and Galeria Metropolia - currently under construction). Because of the Gdańsk Wrzeszcz station, the PKM will also provide a new influx of potential customers for shopping centres located in the area.

There is also potential for industrial investments along the Tri-City ring road. Currently, the highest concentration of industrial buildings in the Tri-City is located much further south than the PKM. However, there are vast plots of investment land located in the area that are well-suited to this sector. Therefore, new PKM stations may be one of the key factors for production companies searching for investment land. Good accessibility for potential employees is an important factor when choosing location for logistics centres too.

Katarzyna Kuniewicz, Director, Market Analysis & Research, REAS, said: “The Jasień and Kiełpinek stations in particular will be major stimuli for the multi-family housing developments. These two stations will provide convenient communication with the city centre for residents of new neighborhoods being developed south of the PKM line. Furthermore, Brętowo station and its impact on the surrounding area have to be considered from the perspective of a number of transportation upgrades around the Piecki-Migowo residential complex. These improvements will enhance the accessibility and attractiveness of the locations for new multi-family developments. PKM may also result in the increase in the density of single-family housing built by individual investors in the form of detached houses, as well as terraced houses and semi-detached houses built by developers in the area of Matemblewo or Osowa”.

Integration of the transport system and reduction of traffic

PKM will integrate all the other means of transport in the Tri-City, in particular rail transport. Wrzeszcz station will gain in importance, becoming a major transport hub in the Tri-City agglomeration. New inflows of passengers will use existing means of transport, such as the SKM, which will lead to increased accessibility to properties along the SKM line. The PKM will be one of the factors that may reduce automobile traffic in the Tri-City by offering a sound alternative on the east–west axis. The new rapid and reliable means of transport should convince a significant number of people to choose public transport over cars.

Prestige for the agglomeration

Jan Jakub Zombirt, Senior Analyst, JLL, concluded: “With SKM, Tri-City is today the only urban centre in Poland, apart from Warsaw, that has a separated urban rail communication system and thanks to the new PKM line, the city's public transport will offer an even better service. Nevertheless, besides the obvious communication benefits resulting from the new line and its impact on the real estate market, the marketing effect should also be mentioned. Investments in urban railway infrastructure will improve the city’s prestige. In fact, it may be hard to measure, but it will result in an increased awareness of the Tri-City’s brand among foreign investors. This project will create several positive associations, such as modernity, dynamism and sustainable development, and will underline the metropolitan trait of the agglomeration. Furthermore, the PKM will also service the airport, enhancing its recognition among airlines planning to develop in the region”.