In Q1 2015 lease agreement totalling 300,000 sq m were signed on the Polish office market. 1.4 million sq m of office space remains under construction across the country.

Anna Młyniec, Head of Office Agency and Tenant Representation JLL, said: “We have witnessed a very good beginning to the year on Poland’s office market. Sound demand – a total of 300,000 sq m - registered in Warsaw and regional cities in Q1 illustrates the positive market sentiment in terms of occupier activity. Total new office supply across the country delivered in Q1 totalled 149,500 sq m, out of which 59,000 sq m was completed in Warsaw and 40,600 in Poznań. Developers are very active as 1.4 million sq m is under construction with various delivery times. Warsaw contributes more than half of this total”.

Gross take-up in Q1 exceeded 168,000 sq m in Warsaw (30% higher than in the same period last year), continuing the strong performance seen in H2 2014. Leasing activity was most evident in Mokotów (Upper South), where take-up was over 61,600 sq m (37% of total office demand in the city). The most notable leasing transactions in Q1 were PZU’s new deal (17,500 sq m in Konstruktorska Business Center), HP’s renewal (10,400 sq m in University Business Center II), and P4’s renewal and expansion (10,200 sq m in Marynarska Business Park). The positive sentiment in the leasing market is expected to be sustained in 2015. 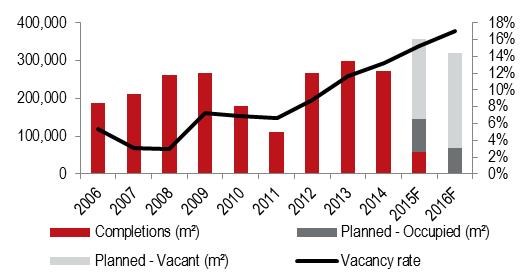 Mateusz Polkowski, Associate Director, Research and Consultancy, JLL, commented: “Q1 2015 saw a surge in new office space coming onto the regional markets. These markets saw a total of 90,500 sq m being delivered, far exceeding the new supply level in Warsaw. Development activity remains exceptionally strong in Poland’s major cities: almost 640,000 sq m of office space is currently under active construction outside Warsaw. Wrocław is the frontrunner in this respect, followed by Kraków and the Tri-City. It is worth noting that Wrocław and the Tri-City have the highest pre-let levels in buildings under construction, at 35% and 28% respectively. In total, office markets in major agglomerations outside Warsaw can grow by over 467,000 sq m in 2015”.

The largest projects completed in 2015 so far are: Business Gardeń Poznań phase I (40,600 sq m), Bonarka for Business E in Kraków and A4 Business Park phase II in Katowice. The largest volume of new supply was delivered in Poznań.

Q1 saw a pause in the upward trend in Warsaw's vacancy rate, which stabilized at 13.0%. However, JLL expects the rate will start to grow again with new office completions planned for delivery in Q2–Q4 2015 and in 2016.

Vacancy levels varied across the country. With the exception of Poznań, most major markets outside Warsaw recorded slight decreases or remained stable. The vacancy rate is lowest in Kraków (6.2%) and highest in Poznań (23.3%).

Stock and vacancy rate in major office markets outside Warsaw

Prime rents in Warsaw were unchanged over the course of Q1; however, with a large amount of new office supply coming to the market, rents are anticipated to come under downward pressure as 2015 progresses. This will apply particularly to older, lower quality office stock. Currently, prime headline rents in Warsaw City Centre range between €22 and €24 / sq m / month. Non-Central locations lease at €11 to €18.5 / sq m / month.

“Q1 2015 has picked up where the successful 2014 left off and further improved the position of regional cities on the Polish office market. The low level of completions stabilized vacancy rates across the country - with the exception of Poznań. However, high construction activity resulting in a resurgence of new supply in the next few quarters will lead to an increase in vacancy levels in some markets," Mateusz Polkowski summarized.