Due to record low interest rates, we are currently witnessing financing costs for developer investments and apartment purchases by private individuals at an all-time low. We would like to underline the fact that the current NBP reference rate has remained at a historically low rate of 1.50% since 5th March 2015. NBP’s policies have resulted in the WIBOR 3M rate - the basis for granting most of the PLN loans - at 1.7%. During the last boom on the residential market between 2006 and 2007, the level of WIBOR 3M peaked at 4.2%. At the same time, LIBOR 3M for the Swiss Franc increased by 2%, levelling out at ca. 2.8% between August 2007 and September 2008. Generally, we have cheaper money than in the period between 2007 and 2008 in CHF and an absence of foreign exchange risk (!)

A good run on the residential market

The abovementioned cannot be without influence on the real estate market. The period of good sales for residential apartments has been maintained for almost two years. Therefore, the 2013 and 2014 can be seen as bringing the business cycle, which started with the Lehman Brothers' bankruptcy, to a close. The Warsaw market has become extremely active due to the stimuli of urban investments. The second metro line has increased the interest in districts such as so called “bliska Wola” and Praga. Furthermore, many new investments are being developed in the vicinity of both the city's existing and planned ring road sections. A good example of this is the Ursus district which has a city railway as well as the ring road in close proximity. Furthermore, there is a growing interest in areas near the Vistula river, whose management has increased the recreational value to the city. Warsaw continues to be the destination of choice for young people looking for employment. Many of the city's residents also, without doubt, have an unfulfilled need for having their own apartment.

Residential land is a premium

After a period of diminishing apartment supply we are observing an increase in developer activity and a change in prices. As a result of a good sales performance, the construction works of many new projects have been launched and are very often conducted on land already in developers’ portfolios. Furthermore, we are witnessing a growth in interest regarding land for residential schemes. Historically, the prices of residential plots were lower than plots for either industrial or office schemes. Now the vast majority of these plots of land are exceptionally highly valued especially with regards to commercial parcels for office buildings. One can recognize several similarities with the period between 2006 and 2007. For example, before 2006 a large number of plots, located in Mokotów district of Warsaw, was valued below the value of land for office schemes However, at the peak of the cycle, land prices for residential or office schemes was more or less equal. Currently, parcels for residential schemes are sold more easily and for higher prices thanks to the dynamic growth in supply of office space. In fact, there are known instances where office investments have been transformed into residential ones.

When valuing residential real estate one must always take current trends into account. A proper valuation of a residential scheme in terms of formal issues is not enough. What also matters is thorough market knowledge which enables a real assessment of the situation. I deal with valuations for all types of residential real estate on behalf of developers, funds as well as banks. The first two groups of customers often ask for a valuation for financial statements while banks need in-depth valuations for decisions regarding real estate financing. Often, our valuations that are conducted on behalf of banks are treated as a form of a feasibility study with elements of due-diligence. Such thorough analyses help banks to properly determine the level of credit protection.

Local valuers traditionally operate on the residential market. They evaluate different types of real estate – from small apartments and houses to multi-family schemes. Sometimes a bank's commission valuation of large projects are carried out in the design phase. Not all valuers are able to cope with such tasks or with such project scale, and an unrealistic land and feasibility valuation can result in serious consequences. Therefore, saving money by not having a thorough valuation can well prove to be a false economy. The outlay for such a document, within the scale of a developer's budget, is relatively minor but can significantly help to realistically grade the investment, credit or any other decision for which the valuation is being prepared.

Apart from the valuer’s experience and the company’s access to an abundance of data, another aspect is the wider perspective of market analysis. A company operating throughout the whole country usually has a better overall perspective of local markets than valuers who exclusively operate on a local market. International experience helps prepare valuations in a universal format and in a language comprehensible to potential international purchasers or vendors from around the world.

During the valuation of large residential schemes it is also important to include the insurance cover of the company represented by the valuer. For example, JLL takes full responsibility for the valuation not only due to the quality of our brand but also in a financial sense.

There are known instances where the real estate’s valuation has been based on unrealistic levels. Market valuation 'outliers' can result in problems with apartment sales and debt service. An overvaluation of apartments that will never reach their predicted value is dangerous for both the developer and the bank involved in the investment. That is why a real, market-based and properly prepared valuation, conducted by a reliable valuer, is of paramount importance.

The real estate market is a capital-absorbing market and capital cost directly influences its functioning. If the historically low cost of money persists, we forecast further increases in prices of both apartments and investment plots as well as an increase in interest in plots for residential building. And this results in an increase in the demand on professional valuation services. 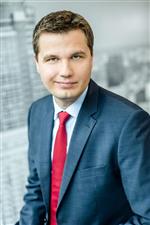 Jacek Kamiński – Associate Director, Valuation Department at JLL, the international advisory firm (NYSE:JLL). He has been involved in the commercial real estate market since 2002 when he was appointed by King Sturge (now JLL). He is responsible for preparing and supervising the valuation of both residential and commercial real estate. Jacek graduated from the Faculty of Geodesy and Cartography at the Warsaw University of Technology , specializing in Cadastre and Real Estate Management as well as Management and Marketing at the Faculty of Engineering Production. Furthermore, he is a graduate of Sheffield Hallam University regarding real estate valuation (MSc in Property Appraisal and Management) and is an honorary graduate of MBA studies accredited by the HEC School of Management Paris, London Business School and Norwegian School of Economics and Business Administration. Between 2003 and 2007 he was authorized as a Real Estate Valuer and obtained the license of Agent  and Property Manager. He is a member of The Royal Institution of Chartered Surveyors (MRICS) with the status of “Registered Valuer” as well as member of the Association of Real Estate Valuers in Bydgoszcz.