Two fire brigades have acquired innovative equipment for extinguishing fire in high-rise buildings in Warsaw. Special-purpose firefighting sets were designed and manufactured by firefighters. This is the first such equipment in Poland. The project was financed by Ghelamco company.

These firefighting sets enable water supply at a height exceeding 200 metres. They consist of an extinguishing unit, a set of high-pressure hoses, equipment for assembling an extinguishing line and mountaineering equipment to protect rescuers working at height.

Innovative pumps, which are to be used in action, specifically during the construction of the highest skyscrapers, constitute the most important element of the sets. These are the first ones in Poland, entirely designed and made by firefighters from the Warsaw Fire and Rescue Unit 4. All the works on this project took almost 2 years.

– Regular pumps take the water up to a maximum of around 100 metres. Therefore, until now, in order to extinguish a fire at a height exceeding 120 metres, we have had to install tanks and motor pumps on mezzanine floors to pump the water to the source of the fire. However, this is time-consuming and labour intensive, as such equipment has to be brought in, positioned and assembled, which can take up to 3 hours. The new pumps will allow us to save time and significantly reduce the number of firefighters involved - explains Brigadier Sławomir Sierpatowski, the Commander of Fire and Rescue Unit 4. 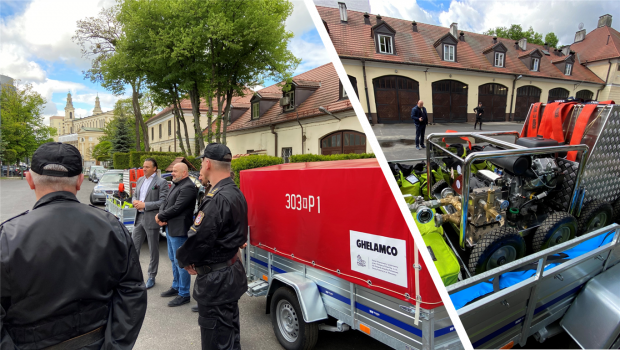 The pumps, financed by Ghelamco, went to two downtown units on Chłodna and Polna streets, which supply Warsaw's city centre, Mokotów and part of Wola district. These are the areas that have the highest number of high-rise buildings in the capital city.

The new pumps will dispense up to 200 litres of water per minute and operate at a pressure of 60 atmospheres, that is 5 times higher than the conventional ones. According to the firefighters responsible for the project, this pressure is so high that their ordinary fire-fighting hoses could not withstand it. Therefore, in order to cope with this issue, the hoses that are normally used for snowmaking on ski slopes were employed as part of the sets.

– We are glad to have helped the firefighters with their creative solution. Being a responsible company, we strive to be a good neighbour and get actively involved in meeting the needs of Warsaw's residents - says Jeroen van der Toolen, Ghelamco's Managing Director for Central and Eastern Europe.