Warsaw, 9th September 2011 - Jones Lang LaSalle is pleased to announce that Le Palais will be the headquarters of IPOPEMA Group, who have officially become the first tenant for this unique project. Companies represented by the tenant (IPOPEMA Securities, IPOPEMA TFI and IPOPEMA Business Consulting) have signed a lease agreement for more than 2,300 sq m, thus occupying almost half of the total office area in the building.

The project is located at Próżna 7 and Próźna 9, bordering Plac Grzybowski, and is a rare example that combines historic heritage with modern A+ class office space. The two historic buildings were originally constructed in the early1880s and miraculously survived World War II. However, over the last few decades the structures have deteriorated to such an extent that they now look practically devastated. This finally changed at the start of 2011 when the new owner (Warimpex developer supported by Raiffeisen Leasing) commenced a major reconstruction of the site. The historic buildings will be painstakingly refurbished from both the Próżna and Plac Grzybowski sides, with a modern flank added from Bagno street. The restoration will not apply just to the facades, but also to the interiors (including stuccowork, pre-war mosaics and driveways for droshkies). Le Palais will feature 6,200 sq m of usable space, of which 4,900m2 will be modern office area, with the remaining 1,300 sq m reserved for high street & niche retail opportunities. In addition, Warimpex will rebuild Próżna street and its sidewalks and finance the renovation of the façade of Próżna 12 a historic building located opposite Le Palais. 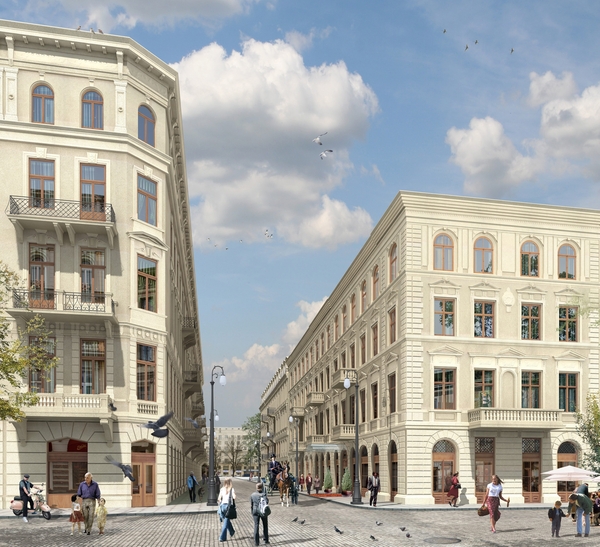 Jerzy Krogulec, the president of Warimpex Polska, said: “Warimpex has undertaken a very prestigious, but difficult project in Warsaw’s historic centre. We have worked with the City’s Heritage Conservation Department very closely in order to reflect as best as possible the actual spirit of the place, and to make the building the epitomy of elegance in the present business world. We are glad that this concept has stirred interest and is appreciated by such significant tenants as Ipopema.”

Jones Lang LaSalle (who are the exclusive agent for Le Palais) represented Warimpex in the transaction.

Michał Lis, Senior Consultant at Jones Lang LaSalle, added: “The first lease of Le Palais shows how much interest there is on the market for such unique projects, which remain very scarce on the Warsaw market. The IPOPEMA Group, a major financial company, is exactly the sort of high profile tenant we are looking for. We believe that this anchor tenant will support our reputation on the market and prove that this is the perfect place for a new business location in exclusive historic surroundings.”

Le Palais is not the first historic project undertaken by Warimpex. The developer has constructed several buildings with a historic background, like for instance the Andel’s Hotel in Łódź. Warimpex has been active in Europe for more than 25 years and has a large portfolio of completed projects within the CEE region (including Warsaw Towers office building and Warsaw’s Intercontinental Hotel).