JLL has been awarded two out of four agent awards for the company's performance in 2015, at the prestigious 13th CEE Real Estate Quality Awards gala, organized by CEE Insight Forum in association with the Financial Times. The firm was named Agent of the Year in CEE for Capital Markets and also claimed the Office Agent of the Year award. Receiving such prestigious awards further confirms JLL’s very leading position on the strategic advisory services market as well as extensive expertise and continuous strong business performance across Central and Eastern Europe. 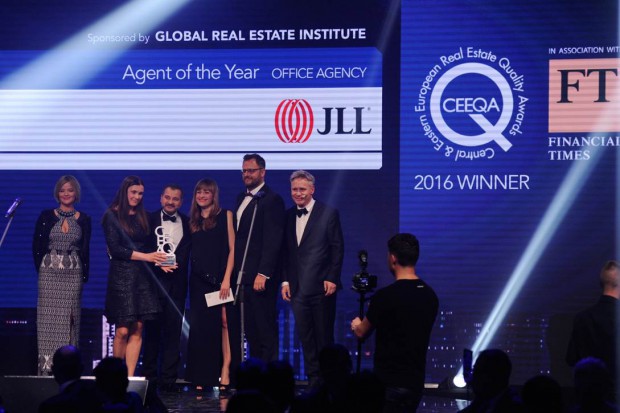 JLL transacted properties worth approx. €3.77 billion in the CEE in 2015. Major transactions conducted with JLL advisory included: TriGranit real estate platform along with a portfolio of office and retail assets in Poland, Hungary and Slovakia; Riviera in Gdynia (ca. €300 million), Stary Browar in Poznań (ca. €290 million), Karolinka in Opole and Pogoria in Dąbrowa Górnicza (€221m); Galeria Sfera in Bielsko-Biała and many more.

The awards were determined by an independent jury panel of key sector decision makers,  including developers, landlords, investors and advisors, active in the real estate industry across the CEE region. The 13th edition of the event organized in Warsaw was attended by over 700 property professionals. The voting was monitored by an independent consulting company – Deloitte.