Lease agreements for over 1 million sq m have been signed in Poland since the beginning of 2015, a result comparable with the record-breaking demand recorded in 2014. 2015 set to have the highest annual take-up in the Polish office market’s history.

Warsaw, 2 November 2015 – International advisory firm JLL summarizes the situation on the office market in Warsaw and other biggest office markets across Poland [1] at the end of Q3 2015. Furthermore, the company provides forecasts for the sector’s further development in the upcoming months.

Anna Młyniec, Head of Office Agency and Tenant Representation at JLL, says: “Lease agreements for over 1 million sq m were signed in Poland in the period between the beginning of 2015 and the end of the third quarter. So far, this year's result is comparable to the record-breaking demand recorded in 2014 with 2015 looking set to have the highest tenant activity in Polish office market history. Since the beginning of the year, 612,800 sq m of office space were leased in Warsaw along with 472,200 sq m on the country's major regional markets. The services sector including consulting, law, media and HR firms, dominates the office market in Warsaw accounting for 27% of demand followed by IT and telecom companies with 22%. The business services sector maintains its domination in regional cities as it accounted for approximately 50% of take-up registered in 2015 on major office markets outside Warsaw.” 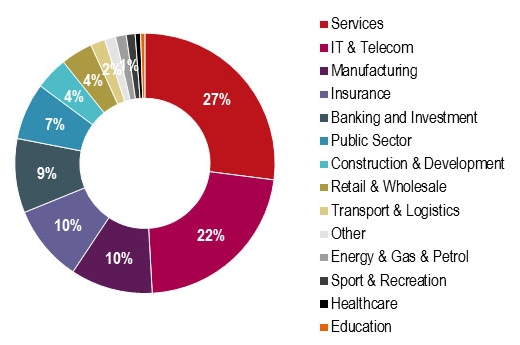 “We expect the positive sentiment in the leasing market to continue to the end of 2015 and into 2016,” adds Anna Młyniec.

Mateusz Polkowski, Associate Director, Research and Consulting at JLL, comments: “The good market situation and tenant activity were recorded on all of the analyzed regional markets. Kraków, the Tri-City and Wrocław put in particularly strong performances with a 27%, 17% and 16% share respectively of all demand this year. Furthermore, Poznań improved its results with 56,500 sq m leased since the beginning of the year - as compared to 18,800 sq m in the whole of 2014. We expect that the high take-up on major office markets outside Warsaw will also be maintained in Q4.”

Among the most notable transactions closed in Q3 outside Warsaw are: two deals for a total of over 24,000 sq m by BZ WBK in Poznań Financial Centre and Business Garden Poznań; a 15,000 sq m pre-let by State Street in Alchemia II; and a 10,000 sq m deal by a confidential tenant in Katowice Business Point.

“Developers have answered the tenants’ huge interest in office space. Approximately 1.3 million sq m of modern office space is currently under construction. Warsaw accounts for 612,600 sq m while 680,000 sq m is being developed across major Polish cities. Kraków and Wrocław are the undisputed leaders of office stock under construction outside Warsaw,” enumerates Mateusz Polkowski.

A drop in the vacancy rate