1.5 million sg m of office space leased in 2015 – the best result in the history of Poland’s office market

Warsaw, 28 January 2016 – International advisory firm JLL summarizes the situation on the office markets in Warsaw and major Polish cities at the end of 2015[1].

Anna Młyniec, Head of Office Agency and Tenant Representation at JLL says: “2015 proved to be an exceptional year, recording the highest tenant activity in the history of Poland's office market. Nationally, lease agreements for approx. 1.5 million sq m were signed with Warsaw accounting for 834,000 sq m of this total. In the capital city, the services sector lead the way with 24% share of demand, while IT & telecom companies accounted for 19%. Outside Warsaw, the modern business services sector continues to propel market development with a 56% share of overall take-up registered in 2015 on major regional markets”.

“In our opinion, this robust occupier activity in Warsaw will likely continue in 2016 and 2017”, adds Anna Młyniec. 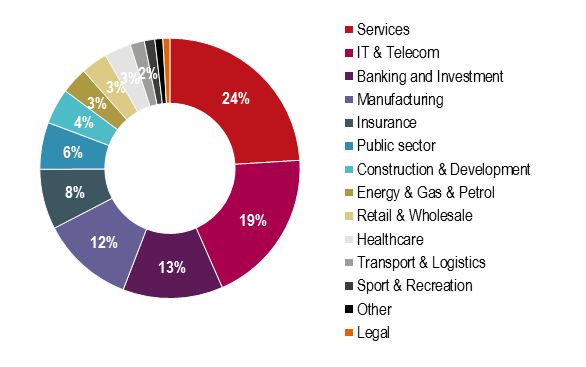 Regional markets on the rise

“Full-year take-up hit 682,900 sq m outside Warsaw with Kraków accounting for 226,000 sq m of this total. One market that has seen a particular turnaround in fortunes is Poznań, which recorded take-up of around 65,000 sq m, more than triple the level achieved in 2014. Numerous companies – both already operating in Poland and newcomers – leased modern space in the Tri-City, Łódź, Wrocław and Katowice, where take up grew by 61%, 53%, 34% and 29% y-o-y, respectively. Volumes in 2015 were boosted by exceptionally large lettings - 13 deals of over 10,000 sq m were registered last year outside Warsaw”, explains Mateusz Polkowski, Associate Director, Research and Consulting, JLL. 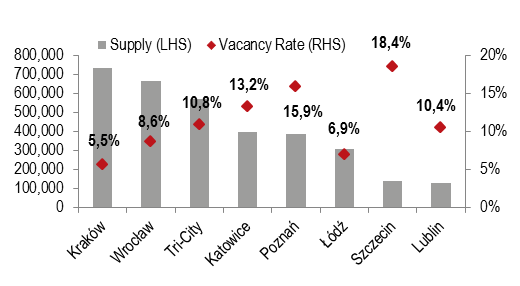 According to the www.officefinder.pl Internet portal, prime headline rents in Warsaw edged down over the course of 2015, with City Centre rents declining from €22–24 / sq m / month to €21–23.5 / sq m / month and Non-Central locations commanding rents of €11–18 / sq m / month. Downward pressures are applicable to effective rents, which are on average 15–20% below headline rents (even higher levels of incentives in terms of strategic occupiers may be expected).

In 2015, JLL advised in office lease transactions totaling 285,000 sq m in. This accounts for a 25% share in overall volume of transactions signed with participation from advisory firms.