Offices for rent in Katowice

A4 Business Park I

Katowice lies in the heart of one of the largest population centres in Europe (the Katowice agglomeration forms a huge consumer market of around 2.2 million inhabitants). The strategic location and transport infrastructure underpin the economic potential of the region, with the highest road density in Poland and three international airports located in close proximity of Katowice, at Pyrzowice, Kraków and Ostrava (drives of 30 minutes, 40 minutes and 1.2 hours, respectively).

Katowice and the wider Silesia region constitute a unique example of successful economic transformation in this part of the Europe. The area, historically focused mainly on heavy industry, has reinvented itself as a strong automotive industry centre and knowledge cluster. The “Silesia Automotive” initiative established in 2011 and its virtual Centre for Automotive Technologies aim to build a platform of exchange and co-operation between member companies and education institutions. The second major driving force of the emerging, knowledge-based economy is the business services sector, which remains the key office occupier in Katowice.

The emergence of an automotive sector that is known world-wide and BPO industry leaders is closely connected with the region’s vast human potential (18 higher education institutions in the city itself and as many as 45 in the wider Katowice agglomeration), developing R&D infrastructure (e.g. the Advanced Information Technology Center, which opened in 2014) and attractive investment incentives (Katowice ranked fifth as large European City for FDI strategy in the fDi European Cities and Regions of the Future 2016/17 ranking).

Katowice has seen a massive improvement in the appearance of its urban areas, with around 45% of the city covered by forests and greenfields, numerous post-industrial sites transformed into new projects (e.g. Silesia City Center, and Górnośląski Park Przemysłowy), the redevelopment of Katowice railway station (along with the Galeria Katowicka shopping centre), and the construction of the International Congress Centre, the Scientific Information Centre and Academic Library.

The city remains an important cultural and trade fair centre, with the Katowice International Fair and Spodek (the latter being the second largest indoor venue in the country) hosting dozens of national and international events every year (e.g. the European Economic Congress, the Tour de Pologne, the WTA Katowice Open and the OFF Festival).

Formerly a major centre for the Polish mining industry, Katowice has reinvented itself and now ranks as the fifth regional office market in Poland (after Warsaw, Kraków, Wrocław and theTri-City), offering some 397,400 m2 of modern office space for lease.

Developers were quick to notice the growing occupier interest in the Katowice agglomeration of around 2.2 million people, and responded to that with a robust volume of new supply. As a result, the market has grown by almost 100,000 m2 over the last two years.

A further 48,600 m2 is at the construction stage and several speculative projects are likely to commence development in 2016. Around 20% of the under construction stock is currently pre-leased.

Eco City in Katowice with its targeted height

The construction of the first two buildings of Eco City has reached its target height. Ultimately, the Eco-City complex, located on Konduktorska Street, is to consist of four office buildings. The ent...

New office space will be created on three floors of a historic administrative building, built as early as 1859, on Dworcowa Street, where the Katowice train station once stood. It will include service... 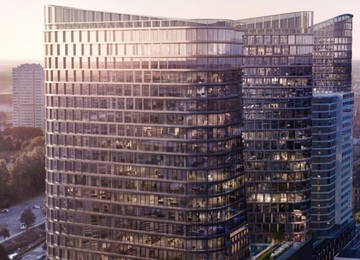 Located in the center of Katowice, the Global Office Park office building has received a BREEAM certificate of Outstanding. This is the highest possible rating awarded by the committee. The main ratin... 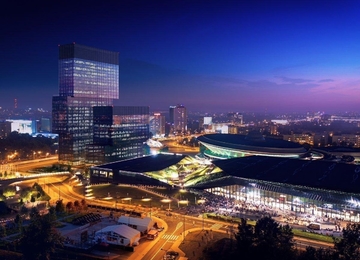 The construction of the .KTW II office building in Katowice has been completed. After a number of acceptance inspections, the building obtained the occupancy permit. .KTW II investment is the modern o... 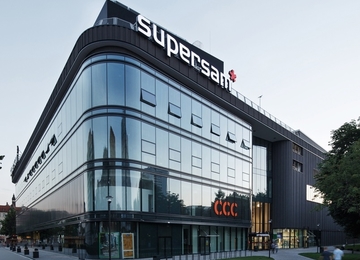 Supersam is an approximately 23,000 sqm office building whose construction was completed in 2015. The office building is currently undergoing modernization, there will be more Class A offices on the f...

Młyńska 6 with the occupancy permit

Młyńska 6 is an 8-storey office and hotel building offering 2,600 sqm. The construction of the property was completed in July 2021, and it has recently received the occupancy permit.Młyńska 6 is chara...

Construction on the crowns of the two towers belonging to the Global Office Park project has just begun. They will constitute an office part of the investment. City residents will be able to admire th...

The construction of the tallest office building in Katowice .KTW II is coming to the end. This year, in July the majority of construction works were concentrated on the last three floors where approxi...

The Global Office Park complex has just reached its target height of 104 meters. It is located in Katowice, at the intersection of Mickiewicza and Dąbrówki streets. The project is a mixed-use developm...

New investment is planned in Katowice with a total area of approx. 25,000 sq.m. It will be a project of two mixed-use buildings with a residential, 4-star standard hotel, commercial units, and office ...